I read a lot of Borges.

My critical thesis in grad school was on Borges’s influence on the fiction of John Barth.

There’s a framed illustration of Borges in the hallway of my house, surrounded by pictures of my family. The Borges picture is bigger than the other pictures. 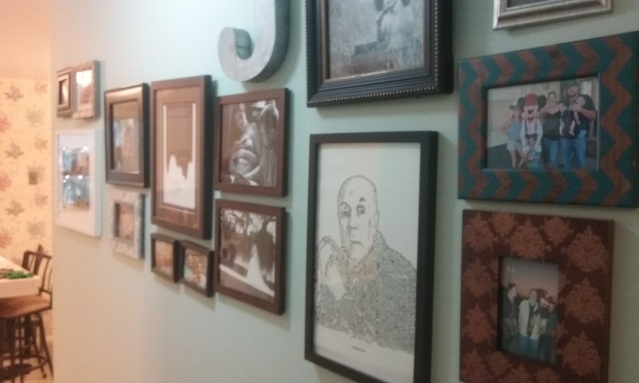 Because of this worldview, characters in Borges’s stories (for example: The Immortal, Shakespeare’s Memory, Borges and I) often blend into one another (or, to put it another way, using Borges’s common motif of the mirror: characters become reflections of one another).

And that’s what I kept thinking about when we took our kids to Disneyland.

For example, here’s a picture of my kid eating a churro. I’m not in the picture, but there’re at least four other versions of me that are in the picture. Can you spot them?

And, of course, it’s not just me. The lives of my wife and of my kids are repeated over and over, as well. Some of those repeats are in this picture, too.

Take, for another instance, the picture above of Borges in my hallway. Next to Borges is a (much smaller) picture of me and my wife and my mother and my kids with Mickey Mouse. What the picture does not show is that we had waited in a long line of families (dozens of families) all of whom took that same picture, and that same long line had formed dozens of times over the course of that day, as it did and as it will do on all other days, including today, such that thousands of thousands (millions?) of families have the same picture with Mickey Mouse hanging on their wall (though probably not next to a picture of Borges).

Yet: it’s an incredibly individual and magical experience. Or at least Day One is magical.

Most of the people who are on that day living the same life as you are living either Day One or Day Two (for some, there is also a Day Three, but for almost all, there is Day One and Day Two).

And because you are at Disneyland and not at California Adventure, then you and most of the other people who are also living your life (specifically, the ones with strollers and giant, over-stuffed diaper bags) are living Day One.

Anyway, Day One is magical. For everyone, but especially the kids. And the kids don’t know and probably wouldn’t care if they did know that thousands of other kids who are living an alternate version of the same life are also having an independently magical experience. Each of the dozens of kids who are lined up to meet Princess Aurora has the individual and magical experience of meeting Princess Aurora, and that experience is unaffected by its repetition for dozens in front and dozens behind (plus hundreds and thousands and millions who have done and will do the same on a day that at Disneyland always looks the same and that repeats itself into infinity) 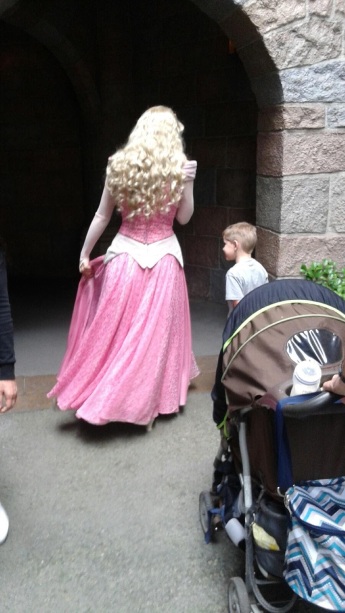 Day Two is pretty awesome, but perhaps less magical. Day Two is about strategy and efficiency. Everyone living Day Two has lived the magic of Day One and is now going to get their money’s worth, because this s-word is expensive.

Day Two begins at the rope line. Everyone living Day Two has read on Pinterest that they need to get there (to California Adventure, where, as mentioned, Day Two is lived) before it opens and to line up at the rope line.

Some people who are living Day Two have read on Pinterest that as soon as the rope drops they need to speed walk straight to the line for the Cars Fast Pass.

Other people are living a version of Day Two in which the thing to do is to speed walk past the Fast Pass line and directly to the Cars ride itself.

A few people are living a version in which the thing to do is to go do something else other than Cars precisely because everyone else who is living Day Two is going straight for Cars, but this way of living Day Two basically means foregoing Cars altogether, and Cars is pretty awesome.

Anyway: everyone who is living Day Two has a strategy with which to conquer Day Two, most of those strategies meant to outsmart everyone else who is also living Day Two and who have the same or similar strategies.

The rest of Day Two is basically a contest to see who in the family first gets to the point that they’ve had so much fun they could kill someone.

And then the next yous arrive and you go home.

One thought on “Borges at Disneyland”