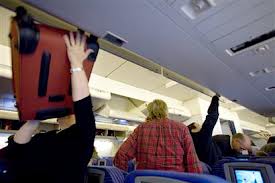 I’ve been doing a bit of traveling lately.  Week before last I was in Boston for the AWP (Association of Writers and Writing Programs) Conference, where I signed copies of Parnucklian for Chocolate in the Red Hen Press booth, and last week I was in New York for a Red Hen Press reading at KGB Bar in the East Village.

It was tough being away from Liz and Tommy so much, and spending entire days on and off planes and in and out of airports is always a drag, but I’ve always found one positive aspect of such days to be the opportunity to get so much reading done.  So I’ve always been a nonstop reader while traveling.  Even when we lived in Brooklyn and I had my two-hour-twenty-minute round trip subway commute to and from my awful job in the Bronx, the second best part of each day (the first being arriving back at our apartment to Liz’s arms) was all that reading on that long train ride.

But these past two weeks I’ve stumbled upon a bit of entertainment that is worth momentarily closing the book and just watching: let’s call it the carry-on shuffle.

The reason for the carry-on shuffle appears to be that at some point (I would assume around the time the economy tanked) several airlines began charging $25, or some comparable amount, for checking a piece of luggage.  So people have begun carrying, or attempting to carry, or more precisely rolling or attempting to roll, larger and larger bags onto the plane and hefting those bags into the overhead bins that were designed to stow briefcases and backpacks and jackets and the like and not suitcases.

On both of my recent trips, I checked a suitcase, despite the extra charge, and carried-on a backpack that fit neatly beneath the seat in front of me, allowing me to observe rather than participate in the aforementioned shuffle, which begins even before the plane begins to board as passengers, tightly-packed mini-suitcases in tow, regardless of group or zone number, begin to crowd the gate, aware of the lack of overhead space, desperate to avoid the awful fate of having their bag checked, the shuffle then continuing onto the plane, where the overhead space over one’s assigned seat is inevitably filled with the bags of someone seated god-knows-where, forcing one to hunt down an open space elsewhere and to endure the icy glares of their fellow shufflers as they struggle to stow their belongings and battle their way back to their row, only to relive the experience in reverse at flight’s end.

Though aggravating at the time, the high point, in terms of entertainment value, of my shuffle-observing the past few weeks came on a flight from Boston to JFK when a woman stood up on a seat—not her seat, mind you—and proceeded to repeatedly bash the overhead compartment door into her jutting out, oversized suitcase—full force, a dozen or so times—until the right side of said door was clearly broken from its hinge, at which point the woman stepped down from the stranger’s seat and declared, presumably in reference to the flight’s crew, “I’ll just let them do it.”

Irony #1: the carry-on shuffle has become so ingrained into our travel culture that it is no less present on flight’s operated by airlines that don’t charge for checked bags, as this one was.

From my seat several rows away, I could not see whether or not my fellow passengers, with their eyes, were adequately shaming the woman in question as we waited, prior to taking off, for forty minutes while a maintenance worker tinkered with the damaged door, coming and going in a mad search for parts, plus another thirty minutes as he filled out paperwork, but as I returned to my book, I could hope.