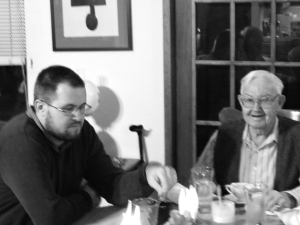 The following is the eulogy I gave yesterday for my grandfather, Richard (Dick) Deller, who passed away last Tuesday:

The best way to describe Dick is as a man full of idiosyncrasy.  He had these little ticks, most of which all came back to everything needing to be arranged and done in exactly the right way.  The table setting had to be just so; the bed had to be made just so; everything from the rain gauge to dirty socks and halters and bridles and the hat on your head had to be placed in a precise spot in a precise way.  The last time I saw him out of bed—though his straw hat was well-placed—I took his uncharacteristically un-tucked shirt as a significant sign.

“Correct” was the word he used and that we often turned around on him and teased him with.  He liked things “correct”.  Good luck going out to eat, asking him if he enjoyed his meal, and getting a response other than a) Not particularly, or b) That was the worst G.D. thing I’ve ever eaten in my life.  At Christmas, you were well-advised to keep your newly-opened gifts nearby and neatly stacked, else they be scooped up with the bags, shirt boxes, and wrapping paper that he would begin collecting—before everyone had finished opening gifts—and taking out to the burn barrel.

We rolled our eyes at his mandates for correctness, but I think it’s fair to say that the successes he had in life—particularly with his horses [my grandfather was an inductee into the National Reined Cowhorse Association Hall of Fame and recipient of their prestigious Vaquero Award]—are attributable to that trait.  He had a firm view of what was “correct” and he stubbornly stuck to it.

And when things were not correct, he had a broad vocabulary at hand to signify it, most of which is inappropriate for this venue [Sacred Heart Catholic Church in Ione, CA].  His most frequently-used phrase, “Jesus Christ,” would seem appropriate, but the difference is in the context.  When he really meant it, he put the “H” in the middle.

Another favorite phrase of his was “What in the world?”—emphasis on the first and last word.  He often seemed concerned about the world and what was in it—especially all the people clearly not doing things “correct”.  He’d watch TV and shake his head or say, “Look at this A.H.”  Sometimes we’d be driving and suddenly he’d say “47” or “34”.  “Counted 34 cars, Biege [his moniker for me].  Where do you think all those A.H’s are going?”

But that was all “behind the scenes” so to speak—what he’d call, “running his big mouth”.  Never once in my life did I see him fail to treat another human being—from old friends to bank tellers—with courtesy and respect.  And when gratitude was due someone, he paid in full.  Whether I drove him to church or cleaned his gutters or brought him a sandwich, he thanked me repeatedly and spiritedly.

Over the years he talked a lot about growing up around Sacramento and Pat Hoy and “those old guys” being willing to put up with him and help him with his horses and answer his questions, and he was truly grateful for what those men did for him, and he paid it forward in his openness to helping “these young guys”.

He did help me with my rope horses over the years, but I know I should’ve and would’ve gotten a lot more out of him if I—or maybe we—had been less stubborn, but there is consolation in knowing that his knowledge may go to use in those more willing to listen.

There is no better example of the courtesy and respect he showed to people than in his marriage to my grandmother—and no better example of the love and care one person can show to another.  At my wedding, just a year and a week ago, I said that I aspired to be the kind of husband that Dick was to Genevieve, and I can think of nothing now to which I’d rather aspire.

A few images of their love come to mind:

When Genevieve had hip surgery a handful of years ago and had to stay in recovery for several weeks, one of us would drive him in to Stockton in the morning and drop him off and he’d sit with her all day and we’d drive him back in the evening.  The notion of him spending a single day without her was out of the question, and the ritual of endearments and kisses upon their separation each night was precious.

Getting into the car the morning of her brother’s funeral, again a few years ago, Dick turned to Genevieve and with sincere wonder and amazement declared, “Babe, you look beautiful!”

Genevieve passed away on a Friday morning [June 15 of this year], and that evening my mother happened to be standing in the room as Dick turned down her sheets for her on her side of the bed, just as he must have done nearly every day for 69 years, and it is these images that make it clear for me that—though I will miss my Gramp—he is in the place he wishes to be, beside the person he wishes to be with.

2 thoughts on “Eulogy for my Grandfather Dick Deller, NRCHA Hall of Famer”